What’s in a Social Justice Diet?

You can make whatever diet you’re currently eating even healthier.

by Ray Levy-Uyeda; reprinted with permission from Yes! Magazine

Billions of dollars are spent telling individuals how to eat healthy. But even if you follow EAT-Lancet’s planet-friendly diet to a T, and your dinner plate is filled with gluten-free nutrivore fare, vegan locavore leafy greens, and ovo-pescatarian (wild caught!) omega-3’s, it still might be missing something. America’s industrialized food production and the dire nature of our planetary health raise the question: How do we add climate and social justice to our diet?

This year, members of the federal Dietary Guidelines Advisory Committee will convene to update their recommendations. But this effort to help guide Americans toward a “balanced” diet is also the product of lobbying by the dairy, grain, and meat industries, which have long been accused of pursuing dollars at the expense of health.

Considering the impact of environmental racism and the number of food deserts in the United States, it’s clear that food production and consumption are not just about personal decisions. It’s about politics and systems that determine who has healthy grocery options available and who does not. Existing guidelines not only ignore the needs of the climate and rely on intensive factory farming practices, but they assign blame for poor bodily health and quality of life based on “choices” that, for many people, simply do not exist.

What would it look like to be able to eat with justice—social, racial, economic, and climate—in mind?

Before we talk about eating, we have to talk about the land on which our food is grown. In contrast to the American colonial prioritization of extracting resources from the ground, rivers, and oceans, Indigenous food systems are built on a relationship with the land. But when Native peoples were forced to leave their lands—along with their soils and place-based expertise—they were robbed of the healthy diets they had developed over generations.

Genocide, forced assimilation, creation of reservation territories, and continuance of anti-Native policies have dispossessed Native people of two kinds of wealth: the ability to truly self-govern and manage their land, and the ability to build capital, which would enable individuals to make choices about how to live a healthy lifestyle.

“What we’ve noticed, and what I’ve aimed to do, is promote the simple enrichment of diets through our traditional foods, because we know that eating just one traditional food meal a week changes the blood,” says Valerie Segrest, a member of the Muckleshoot tribe and a director with the Native American Agriculture Fund. According to a 2019 U.N. report, Indigenous peoples steward 80 percent of the world’s biodiversity—plant and animal species that are essential to climate health.

But the U.S. government has an abysmal record of breaching treaties made with Native governments. And by replacing Native food systems with industrialized versions, Segrest says the U.S. harms the land and public health simultaneously. Native leaders, U.S. scientists, and public health officials say that chronic diseases, including diabetes, didn’t exist in Native communities until the mid-20th century. Now, Native people have the highest rate of diabetes of any racial and ethnic group in the U.S.
Segrest has worked with all of the tribes in Washington state to teach the importance of traditional ingredients and says that Native foods are the remedy to this health crisis: “What’s good for an Indian is good for everybody.” 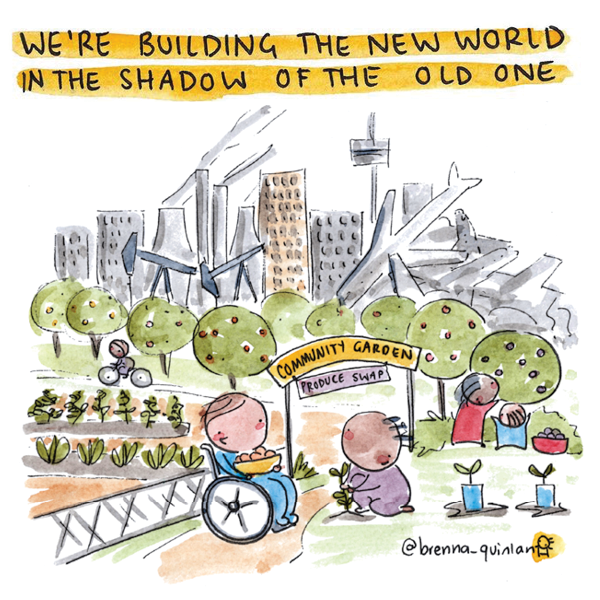 Ayanna Jones is a Black farmer, educator, and community organizer in Pittsburgh, Pennsylvania. She lives in a majority-Black community, which runs up against a number of institutionalized racist practices. “Food justice is huge for us,” Jones says, detailing how her community’s food options are limited to local grocery stores that often sell low-quality or spoiled produce.
Stores offering higher quality and healthier options are intentionally located in the wealthy White communities, where customers are thought to be more interested in and able to pay for them. For those who can afford to travel to these neighborhoods to shop, their dollars end up leaving their own communities.

With this in mind, Jones says she began to think about what it would look like to grow her own food, to become self-sufficient. She wanted to find a way to show young people in the community that their bodies were worthy of food that is not rotten or laden with sugar and salt.

In 2015, Jones started the Sankofa Village Community Garden to provide anti-food-apartheid education and community programs, including gardening for seniors and summer camps for youth. Here she teaches young people how to produce their own food and how their bodies feel when they eat food that’s good for them.

“I give them that mental food,” Jones says. “They’re discovering the myths they’ve been given about food and food justice.” But even when one learns that sugar-filled cereal won’t sustain a child throughout the school day, if parents aren’t paid a wage that allows them to purchase healthier options, it’s difficult to turn knowledge into action. Still, Jones believes that “information is power”—that knowing is better than not knowing. “I’m growing to educate,” she says.

In nearly every corner of the country, it’s cheaper to purchase a liter of soda than it is to buy a head of broccoli; a 2013 study found that a “healthy” diet cost $550 more per person per year than an “unhealthy” one. For a family of four, that’s an extra $2,200 each year. “The system is set up to feed poor people more poorly,” says fifth-generation farmer Andy Dunham, who runs an organic vegetable operation in Grinnell, Iowa. “The only reason that soda is so cheap [is because] the United States government subsidizes the hell out of those crops: sugar cane and corn.” Billions of federal dollars are disbursed annually growing Big-Ag products: corn, soybeans, wheat, cotton, and rice, and to industries like big beef and big pork rather than small family farmers.

“I don’t think people have any idea about how much we spend on policy that [is] environmentally degrading,” Dunham says. To combat today’s industrial production, he calls for establishing ecologically diverse farming systems and a managed grazing system that allows soil to sequester carbon. And empowering people to know the difference. If consumers and voters understand the environmental implications of what they’re purchasing and which businesses they’re supporting through their consumption, then food policy at the federal level might look different. “Having a food literate society allows for policy to be sane,” he says.

In terms of what that translates to on the plate, Dunham says climate justice eating is about having a region-based diet. That doesn’t always mean picking plants over meat; it means taking into consideration where your food was raised and what kinds of energy, chemicals, and transport went into that process. You may need to change your approach to menu planning to reflect what’s in season, rather than relying on production somewhere that’s enjoying summer during your winter. This approach supports local farmers and keeps the carbon footprint of your food relatively low. 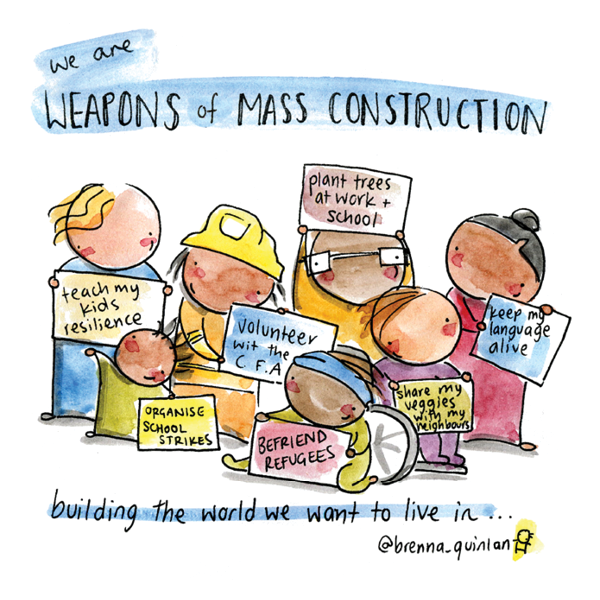 All forms of structural inequalities are made visible in the industrialized food system—from production to consumption, says Victor Brazelton, a community activist and educator with Planting Justice, an Oakland, California-based grassroots organization that works to cultivate food sovereignty, economic justice, and community healing through individual and communal empowerment. Planting Justice hires organizers, farmers, and activists who were formerly incarcerated. Part of its work is to combat current-day colonization and community displacement by building access to organic food through community gardens and educating kids about what healthy food looks and tastes like. “Food is medicine,” Brazelton says. Sustainable farming practices heal people and the planet.

“Community first starts wherever you are,” Brazelton adds, which includes acknowledging and collaborating with the people who originally stewarded the land. In the East Bay of California, the state government forced Ohlone tribes from their land through violence, but despite this, they still live and practice Ohlone culture today in what’s now called Oakland. Planting Justice developed a partnership with the Sogorea Te’ Land Trust, which works to repossess stolen Ohlone land. Planting Justice is currently working to pay off a 2-acre land parcel, and when it does, it will hand the deed over to the Land Trust.

“What’s really important is people having agency over their food,” says Molly Scalise of FRESHFARM, a D.C.-based food justice organization. FRESHFARM brings healthy food directly to communities through farmers markets, in-school programs, and gleaning programs, which distribute unsold produce to shelters. The organization also runs a farm-share through local schools, where parents can purchase produce at a subsidized rate using SNAP benefits. Scalise says this is necessarily a collaborative effort with D.C. residents to make sure it’s “not invasive or intrusive.” She says solutions arise from working with neighbors and communities.
The goal is making options more accessible to consumers in order to impact community health while ensuring that local farms remain profitable.

How can we begin to talk about justice when those most impacted have the least access to decision-making tools and systems? That question is at the center of Jamie Harvie’s work. Harvie is the executive director of the Institute for a Sustainable Future, which works to build solutions for ecological health through advocacy and research. A food justice diet, he says, must mitigate climate impact, reduce poverty, and ensure that decision-making processes include those most impacted.

Ultimately, Harvie says, what’s good for the climate will be good for people too. But White, Western, colonial systems have conditioned many of us out of the understanding that food systems and communal health are connected.

Food justice must return systems to communities, Harvie explains. Organizations like Oregon Rural Action tackle food injustice from a farming and policy perspective, by working to change state laws that allow farmers to sell directly to consumers, as well as collaborating with the state’s Department of Energy to provide low-interest loans to schools upgrading their energy systems, and building access to local farmers markets. Local food systems that are communally owned and operated allow for communal wealth creation. This means that food is not only eaten in the same region where it is produced, but the financial and public health benefits uplift the community as well.

Tying together food and climate justice isn’t an intellectual exercise, Harvie notes. Justice work, in any form, is about creating and sustaining relationships with one another, including the relationships with the Earth and our food systems. We have to do the hard work of moving from a transactional, colonial, and capitalist model of feeding ourselves to a relational model of feeding and caring for each other.