(Food for the People)

Yurok People have maintained existence on the Lower Klamath River and villages along the Pacific Coast since Noohl Hee-Kon (time immemorial). The Yurok Tribe is the largest federally recognized Indian Tribe in California, with over 6,290 members. Yurok people continue to reside in villages and communities throughout their Ancestral Territory, including parts of both Del Norte and Humboldt counties, and extending far beyond the current boundaries of the Yurok Indian Reservation.

The coastal edge of Yurok Ancestral Territory spans from the Little River drainage basin at its southern border, including Trinidad and Orick, to Damnation Creek in the north. The inland territory extends along the Klamath River through the Bluff Creek drainage basin, includes a portion of the Trinity River, and sections of the Redwood National and State Park and the Six Rivers National Forest.

Today the Yurok Indian Reservation consists of lands one mile on each side of the lower 46 miles of the Klamath River from just above the confluence of the Trinity River at Weitchpec to the mouth of the river as it flows into the Pacific Ocean, encompassing over 55,000 acres.

Since the arrival of European Americans, Yurok traditional food systems have suffered. The effects of attempted genocide, global climate change, supplanted agricultural systems, outlawing of traditional land management practices, overfishing by non-indigenous settlers, mismanagement of the natural world, damming of waterways, and many other issues are having real effects on the ability of Yurok people to access their traditional foods. The USDA has declared the Yurok Indian Reservation a food desert, where many people have to drive over an hour to reach the nearest supermarket. Those without a vehicle or someone to do their grocery shopping for them are reliant on the often-unpredictable local public transportation system for these trips that can take a whole day for a round-trip.

To restore the Yurok Tribe to total food sovereignty, the Food Sovereignty Division is working toward creating a holistic food system through the development of food villages, called Nue-ne-pueh Mehl Kee Tey-nem’mo-nee ‘Oohl (Food for the People), throughout the Reservation and eventually Ancestral Territory. Fully actualized, each Nue-ne-pueh Mehl Kee Tey-nem’mo-nee ‘Oohl will include a building modeled after traditional Yurok houses that will provide the local community and Food Sovereignty employees with space for teaching and learning preservation, processing, and cooking techniques for traditional and farmed foods. They will have garden spaces, greenhouses, and structures for outdoor instruction that will allow for community members to learn about food production on-site. The Nue-ne-pueh Mehl Kee Tey-nem’mo-nee ‘Oohl will incorporate regenerative agriculture, sustainability, renewable energy, and traditional Yurok land management practices such as cultural burning.

Although there is much more work to do to create the initial three Nue-ne-pueh Mehl Kee Tey-nem’mo-nee ‘Oohl within the Reservation, the project has received significant backing from the community, the Yurok Tribal Council, and outside funders to begin development.

The Yurok Tribe recently purchased property adjacent to the elementary school in Klamath that will be the site for the Nue-ne-pueh Mehl Kee Tey-nem’mo-nee ‘Oohl for that community. Outside funding has been obtained for some staff time and to begin creating its food production space; the garden component will be called ‘O goo-hehl (garden).

Although current partnerships with other groups focused on community food programs will help develop the food production components of all three planned sites, there is a need for additional partnerships, as the goal of total food sovereignty will require significant food production, processing, and distribution efforts.

Beyond establishing and expanding the food production on the three Nue-ne-pueh Mehl Kee Tey-nem’mo-nee ‘Oohl sites, the Food Sovereignty Division is working to obtain funding for the creation of the traditionally-styled centralized buildings. The buildings will allow for the expansion of our current Farm to School educational capacity and provide space for Yurok people to learn traditional and contemporary food production, preservation, processing, cooking, and will help to foster the passing of traditional, generational knowledge that will increase the Tribe’s capacity to self-sustain. 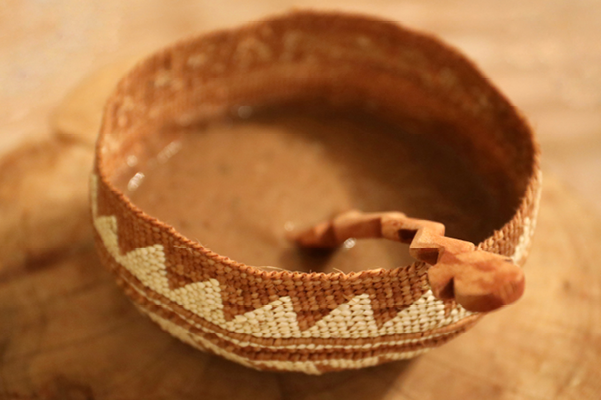