Labor & Workers in the Food System

Sustainable food must be produced in a way that takes not only the environment and consumers into account, but also the people who grow, harvest and process it.

Reprinted with permission; condensed from a longer article on FoodPrint.org

Current methods of production of crops like corn and soybeans rely heavily on machinery. But for raising and processing fruits, vegetables, meat and poultry, the agriculture industry still relies primarily on human labor. Farm and food workers are mainly an immigrant workforce, many of whom are undocumented. They are often poorly paid and work in harsh or dangerous conditions. This is just the latest chapter in a long history: the US was built on exploitative agricultural labor that dates back to slavery. Today, however, some of the most successful worker-organizing strategies are emerging from the fields, as farm and food workers fight for their rights and dignity.

A BRIEF HISTORY OF US FARM & FOOD LABOR

The struggles of today’s food and farmworkers are not new. Since the earliest US history, agricultural workers have been a disenfranchised group, often brought against their will and denied the right to vote once in the US. A brief examination of a history of US farm labor shows that it is inseparable from a history of state-sponsored racism.

In the 1600s, indentured servants were brought from England to work as field laborers in exchange for their passage to the so-called New World. When farm labor demand began to outstrip the supply of willing servants, land owners expanded the African slave trade, developing an economy reliant on the labor of enslaved people kidnapped from Africa. The practice continued legally for 200 years, enriching businesses in both North and South, until the end of the Civil War.

Following the prohibition of slavery, the white power structure passed the Jim Crow laws of the 1890s, institutionalizing discrimination and ensuring that cruel treatment of African-Americans would continue for decades to come. Many former slaves and their descendants continued working in the fields sharecropping, often in conditions not notably better than enslavement.

Meanwhile, farming was becoming big business and the US turned to workers from China, Japan and the Philippines to meet the demand for labor — until the 1882 Chinese Exclusion Act led growers to increasingly turn to labor from Mexico. 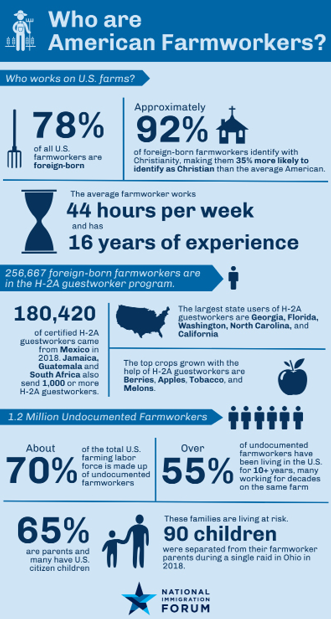 As agriculture became more industrialized, related sectors like food processing did as well. The horrors of the rapidly-expanding meatpacking industry were revealed in Upton Sinclair’s 1906 novel The Jungle, and subsequent public outcry and union organizing brought about food safety laws and greatly improved worker conditions in meatpacking plants.

During the Great Depression and the Dust Bowl of the 1930s, many white farmers were forced to sell or abandon their farms and become migrant workers. With these white farmers now in need of work, a half million Mexican-Americans were deported or pressured to leave. A package of important labor laws protecting worker rights also passed in this period, but they excluded farmworkers and domestic laborers. Not coincidentally, these jobs were most commonly held by African-Americans and immigrants.

A series of temporary guest worker programs began in the 1940s. The most well-known of these, the Bracero program, recruited workers from Mexico. It was eventually ended due to widespread worker abuses and wage theft. Organizing by the United Farm Workers (UFW) contributed to the program’s end. Founded by Cesar Chavez and Dolores Huerta, the UFW united Filipino and Mexico workers in a movement that brought national attention to the struggles of workers in California fields – and built models still used by farmworker organizers today.

Today, immigrants produce the majority of our food, from farms to processing plants to restaurants and grocery stores. Wages are low, conditions are often harsh or dangerous, and immigrants not legally allowed to work in the US are often afraid to report abuses for fear of deportation.

As of 2014, 80% of US farmworkers were Hispanic, which included 68% born in Mexico and 27% born in the US. The foreign-born farmworkers interviewed had been in the US an average of 18 years, and 53% were authorized to work. Farmworkers’ median annual farm incomes in the previous year were just over $17,000.

The 47% of farmworkers who are undocumented and not authorized to work — and the many similar workers in meatpacking plants and elsewhere across the food chain — face struggles. While most federal and state labor laws, including those regarding wages and safety training, protect all workers equally, regardless of immigration status, many undocumented workers either do not know these rights or are afraid to assert them.

Even in an environment of increasingly hardline immigration enforcement, the produce industry is worried about labor shortages — and so it is investing heavily in automation. Robots that can plant, weed and even harvest delicate fruits and vegetables are already working in some fields and facilities, and rapid technological innovation means they will likely become much more common in coming years.

CONDITIONS IN THE FIELDS

Planting and harvesting crops involves repetitive motions, often being stooped or bent for many hours, lifting heavy buckets of produce and operating machinery that can lead to injuries. The work is performed outdoors in hot weather, often without shade or adequate water.
Breaks are infrequent. Sometimes workers are punished for taking a bathroom break, and the common method of paying workers by the piece penalizes those who do take breaks, because they’ll make less money. Workers often face nausea, dizziness, heat exhaustion, dehydration and heat stroke, which is the leading cause of farmworker death.

Farmworkers are also regularly exposed to toxic chemicals from applying pesticides or herbicides (often done without adequate protection), from handling produce that has been recently sprayed, or, in some instances, from being directly in the path of a pesticide application. And many female farmworkers are sexually harassed and abused by their supervisors or other workers. Wage theft is also standard practice.

Conditions at concentrated animal feeding operations (CAFOs), also known as factory farms, are no better. Gases from manure pits including hydrogen sulfide, ammonia and methane fill the air, along with dust and irritants known as endotoxins.

One quarter of CAFO workers experience chronic bronchitis and nearly three quarters suffer from acute bronchitis during the year. Chronic exposure to hydrogen sulfide can cause brain damage and heart problems, and even at low levels can be deadly. Regular inhalation of particulate matter such as dust can cause both respiratory and heart problems, while high levels of ammonia can cause asphyxiation.

For several decades of the mid-20th century, meatpacking jobs were some of the best paid in the manufacturing sector and lifted a diverse workforce into the middle class. Today, however, jobs in meat and poultry processing plants are some of the most dangerous and poorly compensated.

Workers kill, eviscerate and cut up thousands of animals every day, working in conditions that are humid, slippery, loud, hot or below freezing. Respiratory problems, skin infections and falls are common.

Work is determined by the speed of the processing line. Breaks are discouraged or denied, even for the bathroom.

Throughout US history, agricultural and food workers have been some of the most exploited workers in the country. But they have also done some of the most powerful organizing. In the 1960s, United Farm Workers held large-scale strikes at the peak of the grape harvest to force higher wages from large farmers and formed a union to negotiate with growers over the long term. In meatpacking plants, unions such as the Congress of Industrial Organizations and the United Packinghouse Workers of America won better conditions, transforming those jobs for several decades into a secure path to the middle class.

In the last decade, at a time when union membership is at an all-time low and the labor movement has suffered many legislative and cultural defeats, some of the best worker organizing momentum continues to come from the fields and restaurant floors. When the Coalition of Immokalee Workers (CIW), a group of immigrant tomato-pickers in Immokalee, Florida, had no luck getting the big tomato growers they worked for to meet demands for pay increases, CIW turned to the consumer instead. They enlisted student and faith organizations, demanding that the fast food companies that bought from those growers pay just a penny more per pound of tomatoes to give the workers a living wage.

This strategy has had remarkable success: after years of pressure, most major fast food companies and many supermarket chains have signed CIW’s Fair Food Agreement, pledging to buy tomatoes and certain other produce only from growers who meet labor standards.

Meanwhile, fast food workers across the US have led the campaign for a higher minimum wage in the Fight for 15. In just a few years, an hourly wage that in 2012 was too high to be called minimum – $15 per hour – was passed into law in states and cities around the country.

WORKERS ON THE FAMILY FARM

We recommend purchasing food whenever possible from local family-owned farms, which are generally better stewards of the land and water than large industrial farms. Labor, however, has all too often been overlooked by those interested in sustainable food and agriculture, so it is not a given that small-scale local farms necessarily have better labor standards than large industrialized farms.

Recent research has documented abuse, low wages, isolation and poor living conditions of workers even on some farms that sell at farmers’ markets, community supported agriculture programs, and farm-to-table restaurants. Those interested in sustainable food and agriculture must be as concerned about the people all along the food chain as we are about what goes into or onto the food.